The second intervention I did was described in my previous posts, and also in this Google Drawing:

Before and after the Sound and Light in KPop unit I gave students the same instructions:

You have 4 minutes to write an awesome paragraph about sound and light.

Below you will find the raw data and student samples of writing.

Here is the analysis: 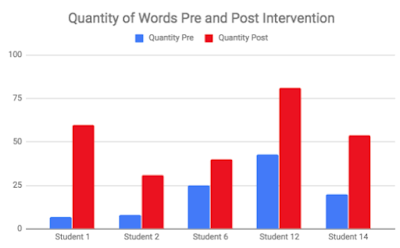 All of the students increased the number of words they wrote about sound and light in the four minutes. 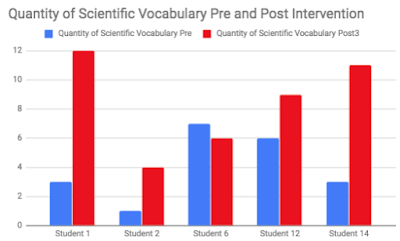 All students except one increased their use of scientific vocabulary. Student 1 and 14 in particular made large gains. 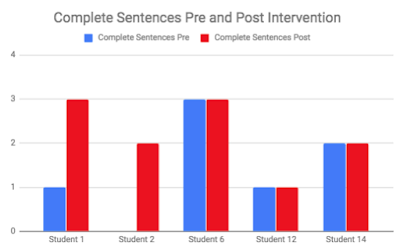 Two out of five students increased their number of complete sentences. Student 12 wrote enormous, run-on sentences in both pre and post test. 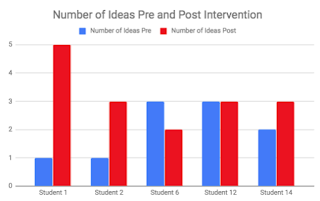 Three out of five students increased the number of ideas they had written about in 4 minutes. One remained the same, and one student wrote about 1 less idea.

I was quite disappointed with the results from students in their end of year science test, which included a section about different sentence types. Two different lessons were spent on sentence types and practicing with them, which I conclude was not enough. I think this is incredibly important learning and should be incorporated into more of my lessons, more regularly.

However, students DID have the opportunity to revisit and revise sentence types before the exam, and knew it would be an entire section in the exam. Perhaps not all students did not have enough time to study all sections of the exam (except, some did).

Most students could not write a Simple Sentence, and (somewhat unbelievably) most students did not even attempt a W-Start Sentence by writing a word (ANY WORD!) that started with W at the start of the sentence! I am not sure what to conclude from this.

Email ThisBlogThis!Share to TwitterShare to FacebookShare to Pinterest
Labels: SReflect